We laid my father to rest today.  What an unusual way to say goodbye to someone.  His funeral was nice, if they can be called nice, and many of his old neighbors and friends and hunting buddies and their wives were there.  It was a beautiful, sunny Tuesday — and Dad would have liked the day — he didn’t like bad weather much any more these last few years.

My Daddy took his last breath on this earth almost a week ago — on Wednesday morning, September 2nd at Arbor Springs in West Des Moines, Iowa.   I was with him and was the only one there (no big surprise, my sister just couldn’t handle this).  I am sure that he could hear me and see me right up until he looked right at me and sort of just sighed his last breath and was gone.  It is so unusual to have someone right there with you one second, and in the next second they are gone to some other place.

Good-bye Daddy — I loved you — I love you still.  You and Mom made me what I am today — a totally honest, loving person.  The responsibility you have left me is a big one, but from our conversations about this, I know you were confident that I could handle it and all the associated issues.   Thank you for your confidence and thank you for all the years of your love.

That country song has been rattling around in my head quite a bit lately.  As I hopped into the car to drive from Nebraska to Des Moines, Iowa I was definitely “on the road again” for the second time on that drive in as many days and for the 6th time in 1 1/2 weeks.  I was tired but the drive was good as traffic was light for some reason.  I stopped for a snack but was determined to speed along so I didn’t even photograph the windmills this time.  The breeze was gentle so they were all just turning sort of lazily and gracefully.   With the air completely clear, the wind farm was visible from 14 miles away and was a beautiful sight for “mind pictures”.

My fascination with the wind farm in Walnut Iowa has not abated one bit, even with all the times that I have driven by it this spring in my “Midwest adventures”.

The answer?  Perhaps it truly is blowing in the wind.  Sometimes I just don’t see the rhyme or reason for anything and my thoughts are just blown by the wind to rather random places.  So much has happened since March 18th when I flew out here to Nebraska that I could write a book.   But much of it, I don’t want to remember, let alone re-live by writing about it.  And the book would be really boring and a bit depressing.

Life goes on — one step at a time.  Hubby and I used to square dance, years ago, and there was a fun dance to a song with the words “one step forward and two steps back”.  It was really a challenging dance, but I can say for sure that living your life to those words is not nearly so much fun.   Apparently, here comes that latest new theme for blog posts — “song titles and their application to current life as we know it”.

As far as the blog theme, rippled effects, I cannot even being to analyze the ripple effects of this latest chapter in my Dad’s life.   Ripples?  Ha!  More like big, giant waves!!!!! 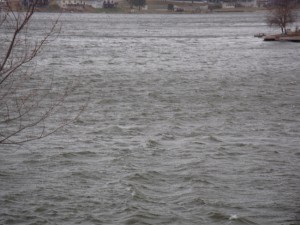 This is a photo of the lake at Dad’s house.  The wind’s were whipping all day at extreme velocity (averaging around 30 mph with gusts higher).  At this point, the sustained winds were higher and the skies were darkening.  About 5 minutes after I took this photo, the tornado sirens went off at the lake and we went to the basement.  The tornado storms flew overhead and one tornado touched down across the river (tipped over a semi and some empty railroad cars) about 10 miles from where we were.   This stormy day was one of the last that Dad was in his home.  The day was very scary, but so was the realization of how anything out of the ordinary so very confused my father.  The dawn of understanding had begun to occur on my part — as to just how non-functional my Dad was even in his own home.    The ripple effect (the wave effect) was just beginning at the time this photo was taken.

I’ll be returning to Connecticut for a brief appearance this coming week in April.  I’m playing in a handbell concert on Friday night and even directing one of the performance pieces.  Should be fun, but there are two long rehearsals to get thru before Friday night.

It has been a really trying time here in Nebraska and Iowa but I think we’ve found an alzheimer’s care center for Dad.  If the application process goes well, we may have him  moved in within two weeks or so.  I’m sure the relocation will be tough and I’m not looking forward to it.  But I am looking forward to being on the far side of the event looking back and seeing him safely settled and working on getting adjusted to his new place to live.

I’ve been in the Des Moines Iowa area all weekend and it has been a really miserable one — almost constant rain and one thunderstorm after another.  Every time you are tempted to observe that things have quieted down, lightning starts up again, thunder rumbles, and rain pours out of the sky.  There were tornadoes in the state today and yesterday we had hail here.    What an adventure this has all been — and it’s not all over yet either.

Well, for this weekend at least, I am not away.  I’m back in Connecticut for Easter weekend — to play for the 8 am church service with the handbell choir hubby and I play in for the Congregational Church.  Then, gratefully, to be able to attend a church service at the Methodist church that we belong to.

Dad is temporarily settled into a care center for physical rehab.  They are working at making him stronger and a bit healthier.  He became quite weak when he started refusing to eat solid food and then, refusing to get out of bed.  Long story short — I took him to the emergency room to be admitted into the hospital.  He didn’t know that was where we were going or he wouldn’t have agreed.  After a 4-day stay, he’s in rehab.  His short term memory is completely absent and some long term stuff gone, and an ability to follow even simple 3-step instructions gone too.  Most of the time, when questioned, he gets pertinent facts correct.  Yes, he has three daughters, but it is far beyond him to come up with all three names at the same time when asked.

So, I’ll be heading back to Nebraska on Monday and working on getting things arranged for his moving to a permanent care home and all the other things that go with taking over your parent’s affairs.

Photos here are from the last three weeks.  Weather issues — spring is always an adventure in tornado alley and sister’s visit with her cute doggie.

Skies over eastern Nebraska — be afraid, be very afraid.  About 5 minutes after this photo was taken, the tornado sirens went off.  Skies were actually greener than they appear here and there were tornadoes in the skies that didn’t touch down until they got about 15 miles east of us.  But they were definitely forming or formed as they clouds flew over at about 60 mph.

My sister’s dog, Spike, is always very entertaining.  He has learned to do a “high five” for a treat.

And, one day, while she was away, I couldn’t find him.  He is always off exploring, likes to grab stuff from the trash and chew it up, likes to find socks and drag them around, and generally can get into quite a bit of mischief if you don’t sort of keep an eye on him.  Well, I looked and looked, and then more carefully looked into the pile of pillows in the corner of the sofa.

Like I said earlier, not exactly a photo taking occasion out in Nebraska right now — but the dog always manages to provide some reason to get the camera out.

Actually, I flew into Nebraska, but, it was in March.  My father is not well.  One sentence – five little words – and what an understatement.  But, if I started typing all the words to describe the situation that  truly belong here, I wouldn’t stop for a long time.  Since I went out to Nebraska, we have at least been able to restore some of my father’s physical health and he is stronger now, eating well, and having his meds administered to him (which he had stopped taking).  But, he will not be able to return to independent living, or even assisted living.  So, I’ll be taking an Easter break in Connecticut and returning to Nebraska to continue supervising his care and, with my sister, begin the search for a care center for him to permanently move to.  Expecting a great deal of argument and angst over this, but as the famous quote from Star Trek Next Generation — “Resistance is Futile”.  Too bad my Dad wasn’t a science fiction watcher so he wouldn’t get this, or with his extreme memory problems, wouldn’t remember it anyway.

No photos for this blog post, but this is definitely NOT a photo taking time.

My sister’s dog, Spike, is watching a squirrel or the birds at the bird feeder.   I was sitting to the side and captured him “touching” his reflection in the glass door.