Much progress has been made during the last week.   All of the base cabinets have been installed and the granite guys were here on Tuesday making templates for the island and counter tops.  It seemed so exciting — and the carpenter and I sat and talked about the schedule which would have the kitchen, not finished, but operational in 10 working days.  That’s two weeks folks!

Back in August (and I barely can remember back that far, but I know that I was wearing shorts and sneakers on that day) we were at the giant warehouse full of granite and marble slabs and had picked 3 beautiful ones  for our counter tops to be made of.  While moving two slabs with a giant crane that hangs from the ceiling, they had broken one of the slabs we were selecting from with the clampy-thingie (that’s a technical term) that was holding the slab up in the air.  The guy quickly lowered it before it totally fell and of course we said, “we don’t want that one”.  Specifying the slabs we did want by number and not looking at the back side of the 3rd one (didn’t want to make the guy take any more time) we committed mistakes 1 and 2.   We signed off on our selection and the granite fabricator, who actually buys the slabs was called that we had made the selection.

Oh — mistake # 1 was not marking the edges of the slabs we had selected with our name and mistake # 2 was not looking at the back of the 3rd slab.

When the guys actually went to cut the granite, there was not enough good granite to cut our tops.  They sent photos via email1313 and sure enough, there was a photo of the slab that had been broken by that clampy-thingie.   The stone warehouse had delivered at least one if not two wrong slabs.  And the third one wasn’t going to be used at all because a big piece was broken off the corner and the back had a big crack filled with epoxy to hold it together that would have been done at the quarry.

So, after removing 10 inches of drifted snow off the driveway and navigating some pretty bad local roads this morning, hubby and I caravanned our cars down to Norwalk to that giant warehouse again to pick two new slabs.

Granite from the same mountain was still available, but I’m pretty sure it’s a bit darker than the rejected granite.  But it is also MUCH larger — both slabs are probably 50% larger than the original ones selected and — this is IMPORTANT — when we left the warehouse, not only were they intact, but they both had our names on them. 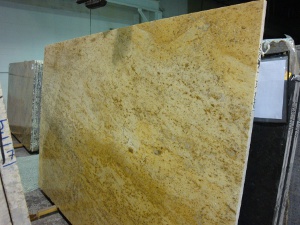 granite slab 3 (number 2 is hiding behind)

About 5 inches fell today and 7 more are predicted for tonight.  That’s all I can write here because the words I want to say shouldn’t be put out for public view in a blog!!!!!!!

The carpenter and his “backup” son (school was canceled by another snowstorm) are here moving cabinets into the kitchen to be ready for installation.  Now things are getting exciting.  And I’m also excited to get some of my living space back.

And this is the view from our front door — not very welcoming is it.  But then again, you cannot get to the front door right now because of last night’s snowstorm.  Only 5-6 inches this time, but the wind is blowing and the front steps are once again covered in snow and dangerous.  But no one uses the front door anyway, so cleanup can wait until the weekend.

Here’s the view from the front door (taken from the corner photographed above by the large glass door).

Our carpenter here is working by himself today and the first cabinet is installed!   Yeah!

The carpenters working here are a father and son team.  Today, son dislocated his ankle on the outside stairs carrying sheetrock out to the truck.  So, off to the ER they went and the cabinets will wait.

Really?  It’s hard to believe, but the kitchen space is almost ready for its cabinets.  A little more flooring needs to be laid down and a little more drywall sanding needs to be done and then the cabinets will be carried in.  They won’t all be installed today, but it will certainly be good to have them out of the living room.  With all them and the appliances in the living space, it’s hard to be comfortable any where.  Let’s hope all goes well.

As snowstorm after snowstorm marches through our area, features of the landscape have disappeared, almost every corner in town is a blind intersection due to the piles of snow, a large number of parking spots in town are completely gone due to snow piles, and folks are getting grumpy here.

Here are photos of the Tuesday snow storm, with snowfall of 18 – 22 inches which came on top of the previous Friday’s snow storm with also 18 inches of snow.  Forty inches in less than a week has caused many problems. 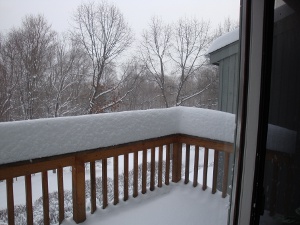 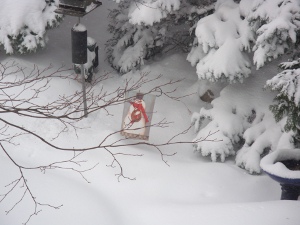 And now we’ve had freezing rain on top of all this snow.  Everywhere you turn folks are having problems with water inside their house from the ice dams on their roofs.  We have heat cables at the bottom edge of our roof, so that’s not our problem.  However, we did have huge icicles hanging off the edge of the roof.  Apparently one of the bigger ones fell over the weekend directly on the decorative light at our front door totally bending the frame of the light and knocking all the bevels loose.  One of the big rectangular bevels is totally missing.  Hubby thinks he may have swept it away with the broken pieces of icicle at the front door.  Guess we’ll find that in spring when all the snow melts.

It’s starting to look like a room again rather than a hollow shell.  Sheetrock walls are going up, ceiling too!

My house has a walk-in refrigerator!  You probably call yours the garage.  It’s probably the “tomato”  – “tomoto” thing.  But it is convenient that it is so *#&@ cold here in Connecticut that food is staying fresh and soda cold in the garage.  Which is also a good thing when the sub-zero (our real refrigerator and the only  thing surviving the demolition of the old kitchen) is one floor above this tiny operating kitchen and behind a sealed plastic wall.  I’ve found a good way to diet — if the fridge containing all the snacks requires shoes and a coat, a set of keys, and a trip up the stairs out thru the dining room slider and into the kitchen slider to get to.  No wonder I’m losing weight — and I thought it was all the worrying about the money being spent on this remodel.

So, with all the stuff out of the room it looks so big.  Wonder how we can keep the illusion as we put the kitchen and sitting room back together?  The carpenters started laying the new hardwood floor last week, but work got delayed by last week’s snow storm (8″ on Friday).  Tomorrow is supposed to see ALL of the sheetrock installed — that will be quite a feat!   Then work will most likely be halted again as we deal with this week’s foot of snow.   One storm a week — more than we need — seems to be the pattern.   Hubby has really put the hours on the snowblower and my errand for tomorrow is to pick up a cable to repair it before Wednesday’s “big blow”.   I’ve taken the annual picture of hubby and blower, but will have ample opportunity for more, I think.

At last, some reconstruction has begun.   The electrician has hung all the boxes that go above the sheetrock, but today the carpenters will begin laying the hardwood floor.  The first day of reconstruction.   This is what it looks like right now……