And after I worked in the pond on Tuesday this week, I was sitting listening to the waterfalls, watching the fish, reading a book, and this beautiful blue guy came by to say hi.  I was too lazy to go in and get the good camera, and if I’d moved he would have probably moved away from my feet anyway.  So, this is from my iPhone but is not too bad.  The blue guy was beautiful!!!!!!!!!!!!

Was out in the yard and garden tending to the birds (filling their feeders), flowers and veggies (giving them water and a dose of fertilizer) and talking to myself (out loud – don’t tell anyone) and occasionally singing a few snatches of some song.  While on the front walk at my concrete planters, talking to those flowers that are doing well and scolding the blue ones that are not looking so good, I  heard a frog croak in response from the pond.

Yes, Phinneas wanted to chat a bit and thought that perhaps I should stop talking to inanimate objects.  So, I took myself to the rock wall on the back side of the pond about 3 feet from where Phinneas sat hidden in the reeds.  How did I know it was Phinneas?  Well, I hate to admit it, but, I recognized his deep, manly (frogly?) voice.  And the fact that he actively exchanged words with me in our conversation.  I would speak and he loudly croaked in his Leopard Frog dialect.  Then I’d speak, and he’d have more to say.  And he had a lot to say.   Our back-and-forth conversation actually lasted about 10 minutes.  Then, it got too hot where I was sitting and Phinneas had told me all that had been going on pond side, so I went in.

Can’t believe that I actually was called to the pond for a visit by a frog.

Summer by the pond — precious time!

Ridgefield’s fireworks were last night.  A beautiful night for them — hubby and I thoroughly enjoyed ourselves.  Went to the high school grounds early, sat and read, ate hot dogs and iced cream, the viewed the fireworks.  I put my camera on a tripod and took some pictures.  Arriving home, I made gin and tonics and we took them out to the deck to star gaze.  What a wonderful evening.

Phinneas Junior is following in the webbed footsteps of his Dad  —  hanging out pondside on the back ledge.  He has become quite tame and has started talking (albeit quite softly) when I come out to feed the fish and start talking to them.

Love my BFFs (Best Frog Friends) and the macro lens that hubby gave me for my birthday in 2009 — which is responsible for many of the great photos you see here.   No zooming or cropping of this photo — this is just the way this great camera and lens takes the photo.  Of course if Junior weren’t as tame as his Dad, I probably wouldn’t be able to get quite so close.  But he doesn’t seem to mind having a camera shoved in his face at all.

Just call me the “pond paparazzi”. 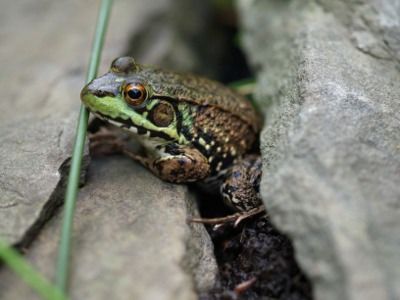