t’s the end of August and the hummingbirds are busy stocking up on nectar for energy for their long flight to the southern USA and beyond. Earlier this week I caught a male hummingbird, by sight, on the deck but he wouldn’t stay still long enough for a photo. However this female, that I call Hummy, has been feeding all morning and isn’t scared by my opening the door for a closer photo. Some of the pictures are thru the glass doors (two panels as a matter of fact) so they are somewhat distorted. But the three at the plant on the metal hangar I took with the lens sticking out of the open screen. Hummy wasn’t the least bit scared of the human with the camera as she was busy gathering from newly open blooms in the bright sun of this beautiful Connecticut Friday! 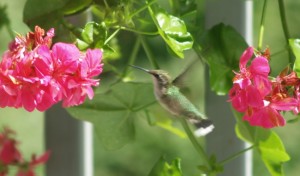 Depending upon the angle and what Hummy is doing, sometimes you almost cannot see her wings, but look at her cute little feet curled up under her body as she hovers and drinks from this flower. 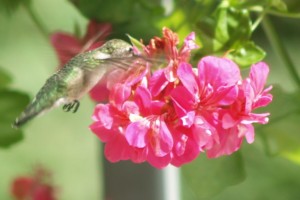 Then Hummy went to the ice plant — a bit of a surprise as she doesn’t usually mess with the yellow flowers at all. But perhaps she was just doing a taste test as she prepared to take a break and sit for a bit. It’s funny, but I never think of hummingbirds as sitting down and perching on something like a normal bird, but they do. 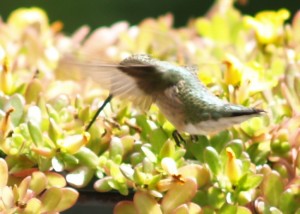 Heading up to the rest stop — 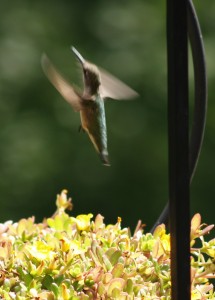 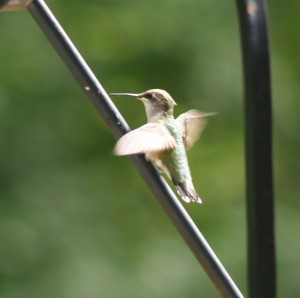 So, since I wasn’t getting anything done in the house anyway, with watching the deck constantly with camera in hand, I decided to go out to the other side of the house to capture the “frog of the day” photo. This one is a female and she’s really flattened herself out on this lily pad, enjoying the day and keeping cool and wet in the water on top of the lily pad. 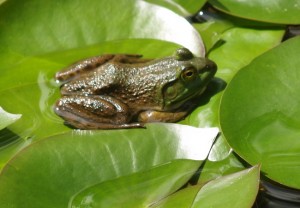 And, last but not least, another pond-side member of Mother Nature’s family — this toad. It is a nightly ritual with me (and sometimes hubby goes along or goes in my place) to go out and say goodnight to the fish and check the area around the pond. A week ago on Friday night, we went out together and hubby spotted this toad backed up into the house right under the front door. He too was not a bit concerned by us going in and out stepping right over him. He also didn’t seem to mind when I got out my camera and took his picture. But then again, maybe he did mind — that kind of looks like a “glare in my general direction” on his face. 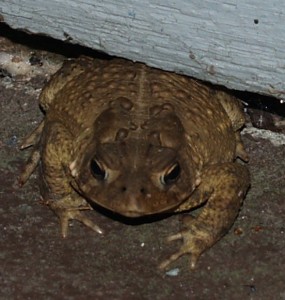 I was on the lower patio this weekend, stretched out on a hammock with a good book and warm sun on my legs.  I could hear water splashing delightfully in the fountain and could look to my right and see the sparkle as the water fell from the second tier into the bottom.   Looking up to the main deck, the plants on the deck railing were spilling over the edge.   And my thoughts were, “What an oasis this is!”.   And I didn’t have to drive miles using expensive gasoline or go thru security at an airport to get there — this is my own back yard.  How often are we so busy fixing and planting and weeding and working and repairing and ……     and not taking the time for enjoying.  So I did quite a bit of that this weekend — some of the work too — but definitely some of the relaxing.   What a wonderful place to be!

Today’s water lily — a new bloom on the white plant. 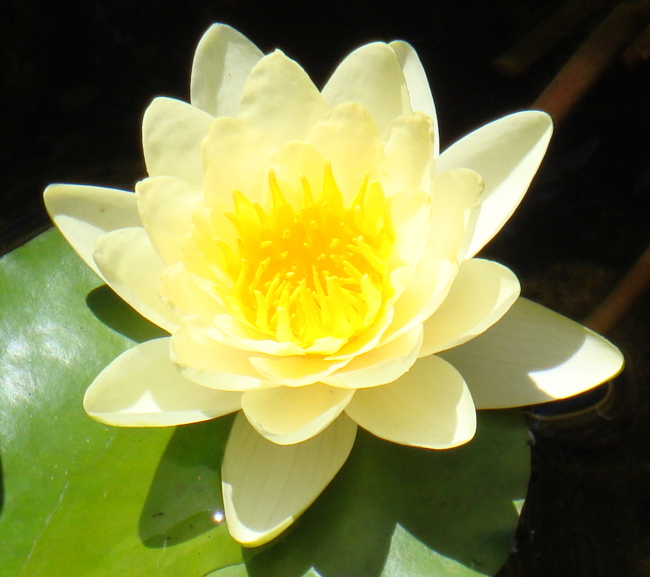 The two adult frogs in our pond have successfully brought at least 5 new frogs into the world around our pond.  They are distinct not only in size, but in their markings, so they are relatively easy to tell apart.  However, my naming convention is lacking a bit of originality.   So here are Number One — 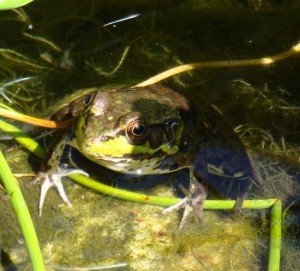 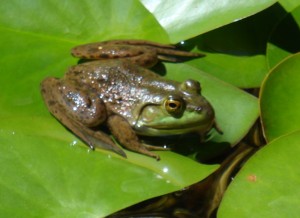 And on the other side of the pond our newest water lily is blooming.  It is absolutely beautiful. 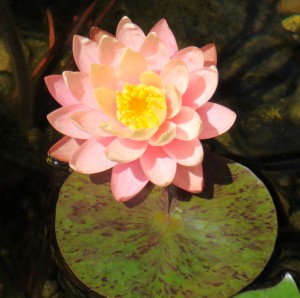 Our big white fish with red lips, Hotlips, is gone from the pond.  We came back from our vacation to find that sometime during the week something got to him and removed him from the pond.  I searched carefully when we got back and more thoroughly when I was working in the pond over the weekend, trimming the waterlilies.  So, we no longer have our gentle white fishie.   So sad.   And, of course, since we don’t know what got him, we don’t know how much in danger the rest of the fish are.  I’m keeping a careful watch and trying to make several appearances at pond side each day discouraging the local hawk if that’s what it was.  However, I cannot stay outside all night, so the fish are pretty much on their own then.   The photo below is the remaining four “big guys” and the little ones are in there too.   Hubby gave me a new camera for my birthday, so as soon as the battery was charged, I went straight out to the pond to capture some fish and frog photos.  Unfortunately, it’s about to rain so the light is kind of dim.  Frog photos to come soon — we’ve had a population explosion and can find at least 5 small/young frogs at the pond. 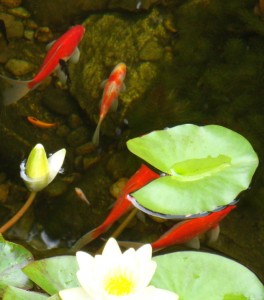 It looks like at least one of the tadpoles escaped the hungry mouths of the fish while it was in the pond and we now have a new young frog on the pond.  She is small enough to actually sit on a lily pad — how froglike!  (The adults, Phinneas, a.k.a. Gurk, and Phyllis are too big and would sink the lily pads if they tried to sit on ithem).  She is quite “jumpy” and not nearly as tame as the two adult frogs.  If you go anywhere near her, she leaps up into the air and lands in the pond with a big splash.  But, I managed to git a little close to her today with the camera for this photo.   Welcome — no name yet  — “froggie”. 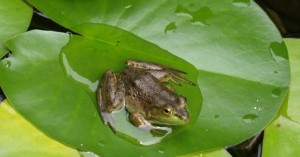 It’s a beautiful day today here in Connecticut. These are the summer days the our area is famous for. Warm and sunny, not too hot, not too cold — as Goldilocks would say, “Just right!”. We parked the car in a lot in town and walked to and from church today and after lunch at a local cafe (out on their deck) we decided to spend some time beside our pond. The fish seemed to enjoy our being out there as they swam around near the surface of the pond biting at the bubbles that were floating around on top from the waterfall. There are several plants blooming right now so the camera came out and I photographed one of the floating water hyacinths and caught a few of the fish near the top. If you look carefully at the photo with the fish, you can see at least one small orange one — this year’s crop of baby fish. He seems to be a daredevil, spending most of his time right in front of the skimmer that contains the pump. The water is moving pretty good there and I am concerned he will be sucked in — but he is not afraid. How do I come up with these fish names?—- well this guy has just been named “Evel Knievel” but we’ll probably just call him “EK” for short. 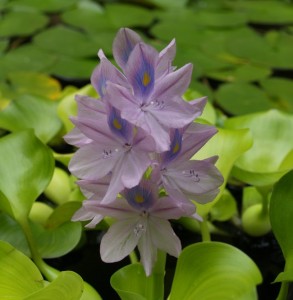 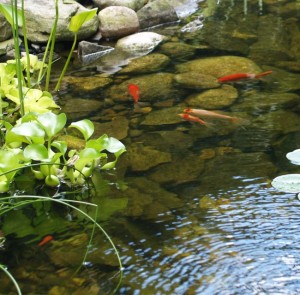