So — it’s finally summertime in Connecticut. I bought fresh limes at the grocery store so hubby could make us some of his excellent margaritas. Well, he hasn’t had a chance to take us into lime season yet but, as of Monday, we are officially in Lyme season. Hubby has had Lyme disease (illness carried by deer tics and transferred with their bite) twice since we moved to Connecticut 8 years ago and now he has found a deer tic embedded in the fold of skin next to his pinkie finger. So, we are on the watch for the telltale red ring-shaped rash and other symptoms. Supposedly they appear in about 2 weeks. “Why might he have found a deer tic on his body?”, you ask. For the answer to that see my post from June 23 titled “Gardening challenge # 1”.

So — it’s finally summer here in Connecticut with all the good, and bad, things it brings.

Hubby and I worked hard in our pond, yard and garden on Saturday and were enjoying a relaxing Sunday afternoon being “trapped” inside by thunder and lightning storms in the area.  I was sitting in my favorite chair by the east windows in our living room, reading and watching TV, when something moving outside those windows caught my attention.   One of this year’s fawns was approaching a flower bed by my patio where I grow the plants and flowers that “deer don’t eat”.   What I have discovered is that the fawns don’t know what deer don’t eat and must taste and try everything at least once.  This spring I have found tops eaten off of plants that deer have never touched before.  I had found the outside edges of this plant munched on earlier this week and asked hubby to spray the area with Bobex (a horrible smelling liquid that deters deer from eating the plants you spray it on).  It was amusing to watch this fawn start to nibble on this plant and then sort of spit and stick out his tongue.  You could almost read his thoughts —- “this plant tasted much better on Thursday!”. 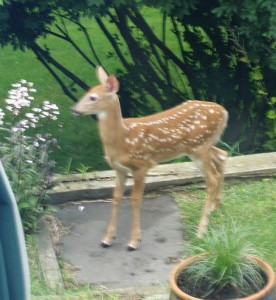 I ran and got my camera — and this photo’s poor quality is due to the fact that I was photographing the fawn through a not-so-clean window.   And no, I did not zoom this photo — that’s how close he was to the house.  His nose has just been pulled back from the funny smelling plant and he seems to be staring at it accusingly.  So, perhaps now he knows this is one of the plants that deer don’t eat.

And on the other side of the house the fish in our pond were in what I called before “crazy fish” mode.  Swimming in circles, darting around the plants and through the falls, and swimming about as fast as I think they probably can swim.   We do have a hatch of very tiny, almost invisible, fish in the pond from an earlier spawning and if hubby is correct in that this circular swimming and chasing of one fish in particular is spawning behavior — well, there are more to come.

It’s a beautiful day here in Connecticut and the call of the wren by his nest and the rush of the water over the falls into our pond drew me outside.  I found that the fish were having a good time playing tag, so I brought the camera out and tried to capture them.   They were swimming so fast that it was not an easy task, but I eventually caught all five of them in one shot and mostly in focus.  Thank goodness for digital photography where you can just delete the bad and out-of-focus pictures.  I’m not positive about the identification, but I think from left to right they are — Hoover, Half and Half, Lady, Hot Lips (white one in front), and Junior.

And as I was trying to catch the fish near the surface I accidentally took a beautiful picture of the blooming water hyacinths.  The reflection of the lavender flowers in the dark water is almost prettier than the flowers themselves.  One of the fish just disappears into the ripples from the waterfall on the left. 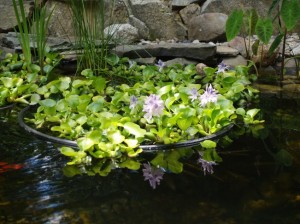 Yes — it’s a beautiful day to be out here with all this.

Weekends at our home bring us into the outdoors, working on the various flower beds, the house (yes, those gutters were full of oak tree droppings according to hubby), the veggie garden,etc. But, the best of all is working around and in the pond and observing the parts of mother nature that we share it with. The pond aquaculture has stabilized a bit from early spring and the slimy algae is all but gone. Of course, it’s being replaced by string algae, but that’s more easily removed from the pond and does not obscure the clarity of the water like the slimy stuff does. The new fish are growing more tame — coming nearer and nearer my hand at feeding time. Yesterday, the bravest one actually took a piece of food directly from my fingertips. He is the most brave and seems to be the most hungry, swimming quickly around and sucking up a lot of food pellets. I’ve named him Hoover (after the vacuum, not the president). The others are coming directly to my hand as I place it in the water but they insist on waiting until the food has been released and they can grab it off the top of the water. It’s really fun to watch them feed and my patience is being rewarded by increasingly friendly fish. We feed them at nearly the same time every day and they are quickly learning about telling time too. They start swimming around near the feeding rock and checking it out starting about an hour or so before the appointed time.

The waterlilies are blooming — absolutely beautiful — one plant is white, the other yellow. 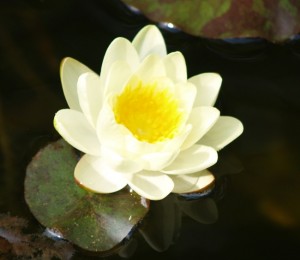 And Phinneas is back this year. Hubby named him Gurk after he first appeared this spring. But he is so large and so tame and his markings are so familiar that I am pretty sure that he is Phinneas back for his third year with us here at the pond. He appeared at the water’s edge the very first weekend the pond was full two years ago this fall. Who knows where he came from or how he knew there was a pond being built that he could call home, but there he was. You can see in this photo how his coloring matches the green of the algae covered rock he is sitting on at the water’s edge. No wonder I cannot find him at times when I’m out visiting the pond. When I go out to feed the fish, I call to them and talk to them to coax them out from under the floating plants. Gurk/Phinneas almost always starts talking to me and responding to my voice. Hubby has read, and is convinced, that if I go to the pet store and get some live insects that I could train him to come to my hand for feeding also. Hmmmmmmmmmm……. 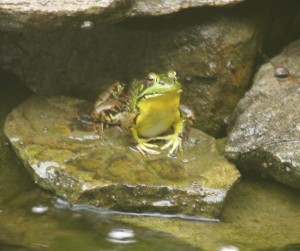 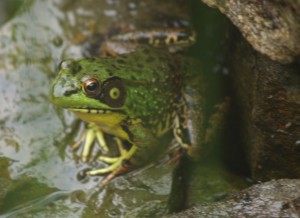 So, while others get into their cars for long drives to their weekend spots, we will be gleefully weekending at the pond.

I am a musician and also love to listen to various kinds of music.  One of my favorites is country music (being from a farm in the Midwest, it’s sort of in my blood).  Today I was listening to a country station while doing laundry and heard a new song.  As is a very typical theme for country music, it was about lost love or almost-lost love.  And one of the lines in it was about having a pebble “in my hand” and throwing it into a river.   Somehow I missed the connection so I’ll have to listen to the song again — because somehow that pebble was supposed to indicate whether the almost-lost love was going to come back or not.

Anyway, what caught my attention was the “I’ve got a pebble in my hand” line.  One of my thoughts when I debated starting blogging was writing about the effects our actions have on others and how we go about our business in this world often not thinking about those effects.  Like a pebble dropped into a pond (or thrown into a river) we leave ripples behind us long after we have left the area.

Each morning when I wake up —  I have a “pebble” in my hand.   The things I do and say during the day as I interact with others (or not) determine what kind of ripples my pebble leaves behind.  Each day I have the opportunity to leave good ripples behind me.   I can think about what I say and how it will affect people.  I can think about my actions and how a smile or kind word can brighten someone’s day and perhaps that person will in turn be in a positive mood and brighten someone else’s day — the ripple effect.

In the case of the environment — I have a huge pebble in my hand each time I use my car to go someplace.  Today, I parked in a remote lot, loaded up my bag and walked to all my errands in town rather than driving to them.  It took a lot longer, but there were several ripple effects.  I ran into a friend on the street that I wouldn’t have had time to talk to if I’d been driving by.  I got more exercise than I would have.   And I used a little less of that $4.45 per gallon gasoline.  Many good ripple effects of my actions.